Seekers often ask me how they can help with the Grail Lords.
The willingness to help and invest some of your time to improve this project is very heartwarming for me and shows what a great community we have build.
To make sure that we use your time in a productive way it is important to know where your qualities lay and how we can use them to the maximum to improve The Grail Lords.

This is a free project and we never going to change that. However you can support us by purchasing Grail Tokens which are our premium currency. Although the use use of Grail Tokens will not make you the best player, they might make your life a little more easy. With your support, the costs of hosting this game is covered. More importantly it allows me to work only part-time as an architect (which pays my bills). The remaining working hours, I can use to improve this project.

Convincing your friends and family to try and play The Grail Lords is a great and easy way to help us!
Bringing new Seekers into the Realm improves the lives of many Seekers already playing The Grail Lords. When our community grows, new towns get build and the world map does expand.
You can promote our project by placing our banners on your website, blog or forum or you can write a review on one of the voting sites or websites for games. By spreading the word -advertising- you make our community grow.
Remember, when a new Seeker signs up using your referral ID (or username), you shall be rewarded for your efforts! You can find your referral and banners here.

The Grail Lords is still a text-based game. There's plenty of room for Seekers who enjoy writing. Even today there are many gaps where a well placed story or description can be placed.
Descriptions of tools, items, inventory objects, skills, followers, monsters, ... are often dull and meaningless, if you feel like it, take your pen and offer a suggestion for these description.
When you read the texts of quests, town building, map locations and something feels not write, you can always send me an alternative. Compared with writing a good text, replacing an old text is just few moments work.

This is a tricky one! Anyone able to play the Grail Lords easily has excellent 10 ideas to further improve the game. The key to see your idea implemented into the Realm "quickly" is how you work it out. The more you chewed on your own ideas, the easier it becomes for me to swallow them. When you want to see an suggestion added, try thinking how it will work together with what already exists and how it will be an improvement for the game. Maybe you can post your suggestions on the forum first, where they can be discussed and fine-tuned before thinking to add them into the Realm.

Images often have an incredible effect in an text based game. They often add depth no words can describe. I amused myself by drawing few images for the game alread, but if you like to draw and want to show the community your skills then this is a perfect opportunity. Before you start to draw, it might be good to contact Lord Arogandor for further arrangements and details.

Due to security reasons, we decided not to share database and coding information with other Seekers. This makes it difficult to make good use of your PHP and MYSQL talents.

In my opinion one of the greatest gifts of (wo)mankind is initiative. We all are born with it so never fear of taking some initiative.

Wow I have done most of that already lol

Hi, I was referred to this game by a guy who apparently knows the maker of this game (Nogwa ring any bells?), so here I am.

If you want, I could help translate the game into Dutch...though in a casual, relaxed, non-pressure way. I've already translated 3 other games into Dutch: "the crusades" (several years ago), "ere moyenne" (about a year ago, as "Humbert") and "medieval europe" most recently (as Jehan Desains). Though as the games move on, they're no longer up-to-date.

So if you fancy having a Dutch translator, do tell. If not, no worries.

This is a very generous offer of you! Unfortunately The Grail Lords are not ready yet to be translated. The texts are currently hard coded into the game and for translations, I should remove all english texts and replace them with variables who contain the preferred language text strings.

But I keep your offer in mind

Hi Arogandor,
first: congratulations for the game! I see the passion and the hard programming behind the game!
I can help in my free time with the images of the site, i thinking to use (with PS help and editing) medieval and renaissance painting and pictures. When i was young i was good with drawing but now im just meh.
But im good with Photoshop and image editing, is my free time hobby.
I can make some examples and you can judge if its ok or not, maybe you want original hand-drawing images, if so i cant help

I dont want anything in return, just for fun and to give an hand. (im italian, so sorry for my bad english).

Hello Stilzkin,
Thank you for your compliment, I appreciate

Because im wounded and i cant go out from Hospital i made a test that prove what i mean with  "medieval and renaissance paintings and pictures". 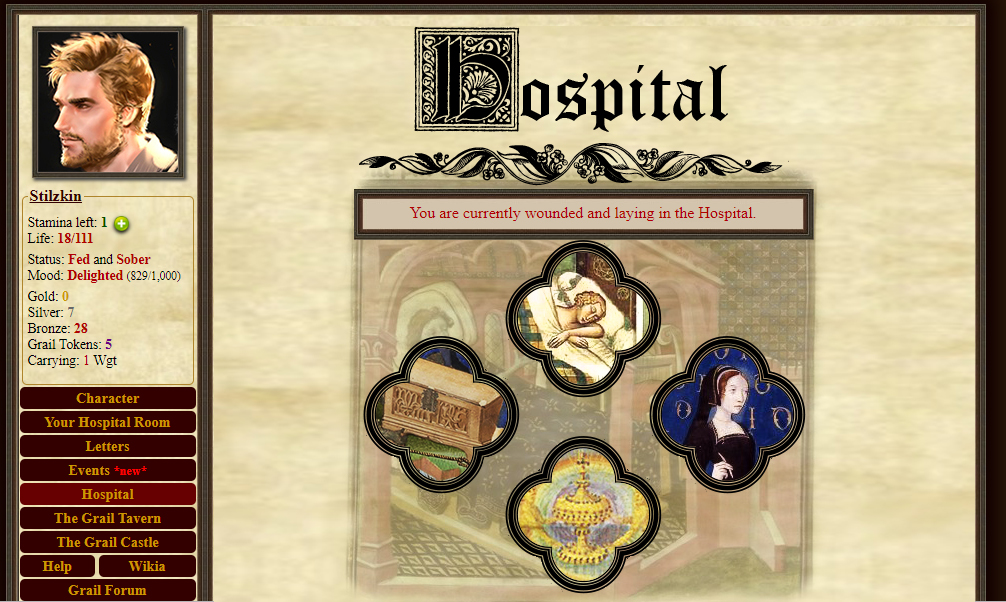 This is only a test, but its my vision of the graphic. If you like it i can continue, if not you are the Lord and creator of the game so no problem

Very nice work Stilzkin!
Do you believe you could make a more pleasant design for our town center?
I believe I have the town building icons in a larger format still, in case this would help?
_________________

Good day Arogandor!
You mean the page where the user can select buildings of the city?
Yes, i can try to make something good, send me larger icons if you can